I have talked about Israeli's love of coffee and the multiple cafes that exist in this country. Here are some of the main ones:

This one is very near our Ulpan (Hebrew language school). A lot of students would go here during our mid-morning break to pump some caffeine into their sluggish and overwhelmed brains. They have great hot chocolate and mochas! 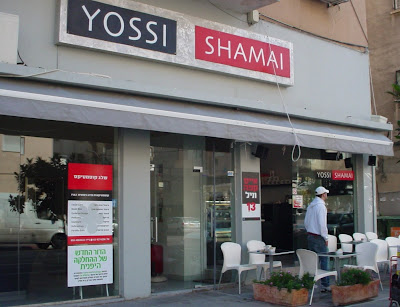 I have never been to Cup 'O' Joe. I should do that before we come home. 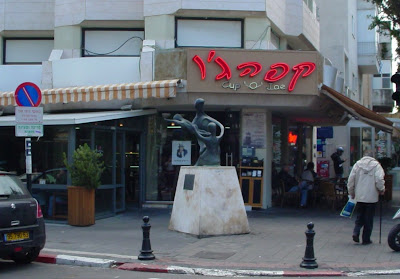 Aroma started out being my favorite. Brent and I were in an Aroma a few years ago visiting our friend Adi. It was located in the central bus station in Jerusalem. That's not really relevant but the point is, I looked at the Hebrew word as you see below in white letters, and read it. It was the first Hebrew word I read without any help. They too have fantastic hot chocolate and every drink is served with a little chocolate candy. Oh, so good. 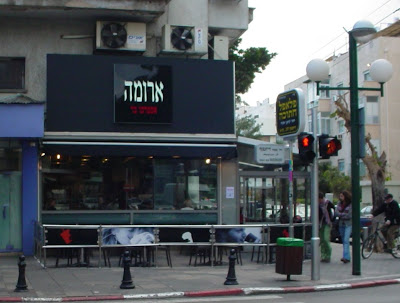 If you have been keeping up with this blog for a while you should recognize the name of this one. The Coffee Bean & Tea Leaf and I became good friends toward the end of our Ulpan course. I would go here every afternoon to study in a comfy brown leather chair, listen to my iPod (usually Ella Fitzgerald, Miles Davis or Waterdeep, who I am totally obsessed with right now) and drink a chai tea latte. 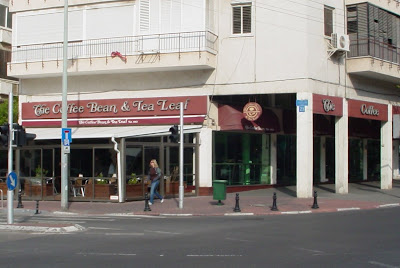 OK, Boutique Central is not exactly a cafe but they do sell coffee. In fact they have a great deal, a drink and a pastry for 14 shekels. Not shabby. And their pastries are ridiculously delicious. They also have the cards that you can have punched for each time you purchase this great deal and to be honest, I have no idea what you get if you get all ten punches. Maybe I should read that card, or at least try....it's all in Hebrew. 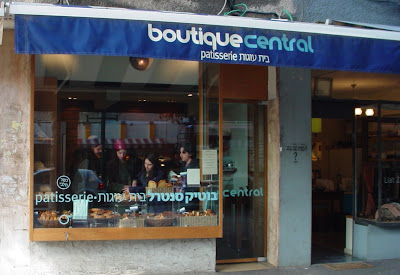 Cafeneto is another I have not visited. It's always got a good crowd but it's not so much in my daily path. It's the opposite direction of where we go most of the time. Um, and someone made a mistake on this sign....though I did this all the time with one of the Hebrew letters that looks like a backwards "c". 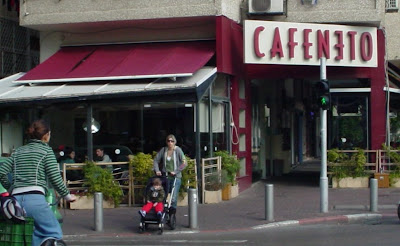 Cafe Hillel is another one I have never been to but it's also popular in this country. It's not the greatest picture because I had to take it from across a large and busy intersection. This cafe is actually diagonal from Cafeneto, so again, not in my usual path. 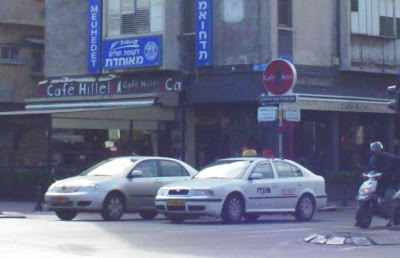 Well, I stopped what I was doing here and took our now working again camera (thank you Lord) to take a picture of one more major cafe in Israel called Cafe Cafe. However, when I got in position to take the picture and turned the camera on, the battery was dead. UGH!!! I will take the picture on another day and get back to you.
I have to say that from the outside some of these look more appealing to me than others. What do you think? I realize this is totally superficial but....go for it anyway.
Least outwardly appealing for me is Cafe Hillel. This Aroma doesn't rank much higher in outward appearance either. Most outwardly appealing? Actually? Cup 'O' Joe, and I've never been there! Oh, the irony!

I like coffee. In fact, I've really been craving like a Caramel Macchiato from Starbucks lately. Mmmmm mmmm.

I personally like the look of Yossi Shamai. I'm quite curious as to what that sculpture thing is in from of the Cup O Joe...is is a mom, dad and baby???

That is way impressive how many coffee places there are in Tel Aviv. Very cool.

Oooh, you could get you a pink scooter and ride it to one of the shops and be all cool drinking coffee knowing you also have a scooter. Yeah. Totally cool. Totally.

Yoshi Shami or whatever it says...on the green scooter.

Ya'll are funny! Nat....there is NO Starbucks here. You are such and orange!!!
coffee and scooters, what a perfect pair.

I'm sorry, what was the question?

I was completely distracted by the fact you managed to squeeze in yet another "scooter picture" under the guise of a "cafe picture."

For shame - you're obsessed, even subconsciously. j/k

Love the cafe visit. Cafeneto's my favorite...the outside seating looks really neat. I like that about big cities. Tokyo had some really neat cafes, also New York City.

That's a lot of coffee shops. I love that they're all different.

Coffee Bean and Tea Leaf is the most appealing to me, since it has the most english words on the facade. :)
I actually think Cafe Hillel looks like an excellent little coffee shop.

You know, if not for coffee, many people woundn't have personalities. It's what life is made of. A waiter and I had a quite a conversation about the flavor of cofee at Charlestons they other day. I was with Miss Fannie Mae for our Catfish dinner. It's tradition for us, we always half a dinner. Anyway, I had to know what they were serving, and he politely said a gourmet roast of some sort..well, it was mighty tasty.Take me to any of those shops over there, I'm sure I'll love it. Coffee lovers drink coffee if it's a -10, or 103 degrees, it doesn't matter. Josey