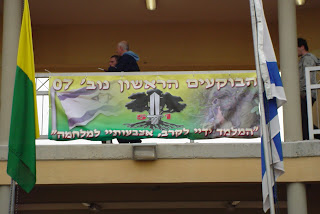 We met Aaron two years ago in the McDonald's in Tel Aviv. He heard us speaking English and saw our Oklahoma shirts and asked us where we were from. Thus began our friendship.
Aaron is originally from Cincinnati, Ohio, were Brent went to college, so the two had much to reminisce about. At that time Aaron was only temporarily in the country. Since then, he has immigrated. He joined the military and earned his way into the elite Golani brigade. (The picture is of the symbol of Golani.) Aaron is very passionate about Israel and serving her. He is also passionate about being the first person from his family to make Aliyah (to immigrate) to Israel. He is the only one from his family to return to the land and will be the patriarch of his family line in Israel. What an honor.
Aaron began his service with the IDF (Israeli Defense Force) in November. After a couple months of what we would call "boot camp" the soldiers are inducted into the army with a special ceremony. Aaron invited us to his military induction ceremony which was a huge honor for us as a sort of family away from home.
So, last week on Thursday Brent and I caught the train to Binyamina, which by train was only about an hour North from Tel Aviv. We got off the train in Binyamina and wondered how we would get from there to the base. We saw some soldiers and asked them. One of which quickly ushered us just outside the train station to a bus which looked more like a tour bus than a public bus. He said, "Get on the bus." Brent asks, "How much is it?" The soldier says, "Free." OoooK. So, we got on. Nobody said anything to us as we did, they didn't even blink an eye; no security, no checking our bags, asking questions. Nothing. There were several other soldiers on the bus and one other civilian. Slowly the bus began to fill up with more soldiers and more civilians. Then the bus driver closed the door and off we went. We drove about ten minutes and arrived at the base. The gates were opened and we drove right through!!! We were astonished! You can't even get into the MALL without someone giving you a pat-down practically!
So we get off the bus and find Aaron. We got to just hang out with him for about an hour, then the commander of his unite spoke to all the family and friends (all in Hebrew....didn't get much of it, kinda tuned out, turned my brain off, was too tired). Then we all walked over to the stadium for the amazing ceremony (again, all in Hebrew but still really cool). There were songs, readings from the Torah, speeches, the National Anthem and I'm sure other stuff I missed out on because of the language. Then came the fun part! Each soldier walks to the front and receives a gun and a Torah. As Aaron said, "What I fight with and what I fight for." But what was really special to witness was Aaron's commander honoring him in a special way.
Each soldier has a tag that is on his arm. On the tag is the picture of the tree from the photograph above; it is the Golani symbol. I believe they have to earn that tag and had just received them that morning. Well, Aaron's commander comes to stand in front of him and removes Aaron's tag. Then he proceeds to remove his own tag from his shirt and puts it on Aaron's shirt. His commander had received that same tag from his commander. This is a very high honor and Aaron was on cloud nine!! What an amazing thing for this new immigrant to achieve.
Aaron, way to go! We are SO proud of you!
Posted by Tonya at 8:41 AM

Why is there gibberish all over that sign you posted? Are you in China or something?

D.P.??? Does that stand for Daniel Perna? Yeah, China.

That sounds cool! I think you and Brent are so brave...I can't imagine getting on a train where I didn't know everything they were saying...with a bunch of soldiers from another country.

So is Aaron saying that the USA is not God's chosen nation? that's weird...