Not Your Ordinary Christmas

Let's just say, nothing is the same in a foreign country.
Our American friend, Kirsten, found a church in Jaffa that was having a Christmas Eve service. So we three caught a cab and headed South to Jaffa. The little Lutheran church was packed! The service was very similar to what we grew up with in that we sang the classic carols and the story of the birth of Yeshua was read. Though, this time, some of it was read in English, while some was read in Hebrew. There was also a message given, in English, then translated into Hebrew. Even the announcements at the end of the service where first said in Hebrew, then in English. It was a great service and nice to have a sense of familiarity.
The funny thing was, Kirsten and I, as we sang the carols in English, tried to read the Hebrew "translation" of the songs and they were NOTHING like what we were singing in English! I don't know who "translated" those songs but I think they may have been throwing back a little too much eggnog!!
Then on Christmas day, Brent and I went on a class field trip to Jerusalem with our Ulpan (Hebrew language school). As you can imagine, the trip, planned by our state run language school, was not so much about Jesus! Of course, it was about Israel and the Jewish people which was very interesting. We even saw some things we hadn't seen before and learned some new things. This was great since we have been here, leading tours (well, Brent has) since 1990. Also, since this was a tour with our Hebrew class, our guide spoke in Hebrew the ENTIRE DAY!! However, the two teachers of the two classes that went threw us a bone every once in a while and filled in the gaps with English definitions! Thank goodness for that!
Probably the most difficult part of the day was going to Yad VaShem, the Holocaust Memorial Museum. We have been there numerous times but it never gets any easier. And, it's not exactly what I would choose to do on Christmas, but such is life in Israel.
One of the great things about the day was being with our teacher, Sarah, outside of the classroom! We got to be on more of an equal level with her and it was fun to just talk with her, in Hebrew and English! At one point she was talking with Brent and me in English and suddenly said "Why am I talking to you in English? You need practice in Hebrew!" Then finished what she was saying in Hebrew! She was born to be a teacher!
The other neat part about the day was that we ended our "tour" by praying at the Western Wall. Now, I must say, that is a cool thing to do on Christmas! Besides the fact that we were in a place were Jesus literally walked! Pretty amazing.
So, not your ordinary Christmas, but still a great day.
I hope each of you had a joyous and blessed day remembering the wonder of what God did for His creation!

"For a child will be born to us, a son will be given to us;
And the government will rest on His shoulders;
And His name will be called Wonderful Counselor, Mighty God,
Eternal Father, Prince of Peace."
Isaiah 9:6 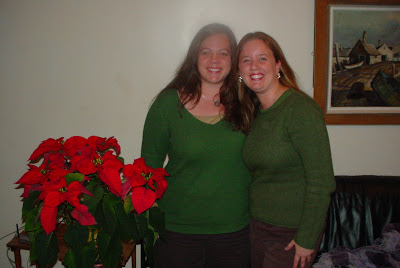 Kirsten and me on Christmas Eve in unplanned matching outfits; green sweaters and brown pants, posing beside the huge beautiful poinsetta Kirsten gave to Brent and me. 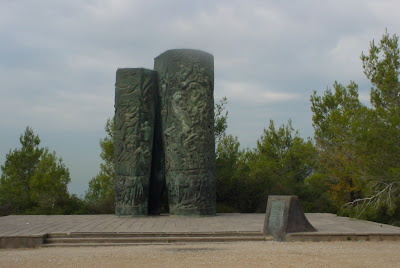 The Scroll of Fire; a memorial statue made of solid bronze commemorating the history of Israel from the Holocaust on through the rebirth of the State of Israel. This statue is located in the Jerusalem Forest. 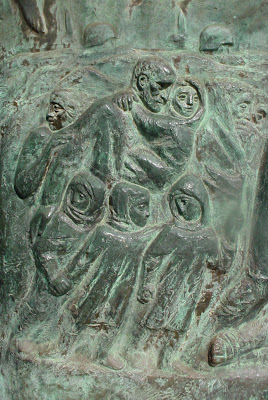 This is one of the carvings on The Scroll of Fire, which is of Janusz Korzak and children from his orphage. You can read about him in one of my earlier posts. 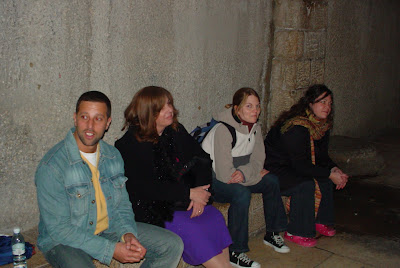 From L to R: Arik, a fellow student in Ulpan from Sweden; Sara, our teacher; Kate, another classmate from Seatle, and me! We are sitting in the Cardo in the Old City of Jerusalem "listening" to our guide. Actually, we weren't really listening, our brains had shut down by this point! The Cardo is the ancient main road that ran through the middle, or the heart (hence the word cardo - cardiology) of the city 2000 plus years ago. 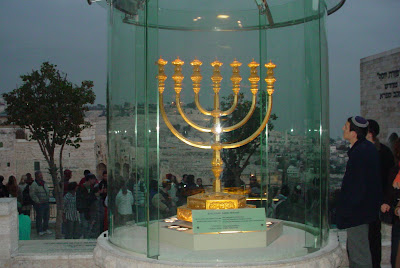 This picture was taken toward the end of our day. This picture is of the golden Temple Menorrah, made by the Temple Institue, which is preparing all of the vessels for use in the Third Temple. And yes, it is covered in pure gold. In the background is the Mount of Olives. To the left of this scene farther down into the valley is the Western Wall, were we ended our day.
Posted by Tonya at 7:07 AM

It could only have been a better Christmas if you finished it off with a bowl of Skyline! :) Miss you! LA

Is your puppy dog with you guys? I was just wondering when I looked over and saw his picture. If so, how's he liking Israel?

Summer, no DJ is not with us...boo hoo!! I miss that little dog a whole stinkin' lot!! He is staying with my Mom and Dad! DJ loves them and I think they are pretty fond of the "granddog"!!

Sorry I am WAY behind the times and am just now reading all the blog entries. This entry made me miss you guys a lot! Man I've got to get back to the Land.

Is "LA" Leigh Anne? If so, why is she going the anonymous route? Step out, sister!