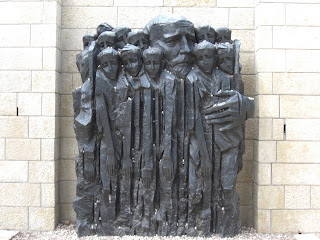 Janusz Korczak was a pediatrician, military doctor in several wars, an author, a director of an orphanage and even had his own radio show. However, these accomplishments pale in comparison to one amazing act of selflessness.
During World War II, the orphanage Korczak had created for Jewish children in Warsaw was forced to move into the ghetto. Three years later, German soldiers came to collect the children, who numbered almost 200, and several of the staff workers to take them to the Treblinka extermination camp. Because of Korczak's fame and accomplishments, he was told he would not be taken and could find sanctuary on the "Aryan side" of Warsaw. Korczak refused. He chose to go with the children to the death camp.
He had the children dress in their best clothes and choose a favorite book or toy to bring with them. So they would not be frightened, he told them they were going to get out of the ghetto, outside of the walls, to a meadow where they could play. They were then marched through the streets of the Warsaw ghetto, like a parade, to the trains that would take them to their death, Korczak with them.
This picture is of a memorial statue of Korczak and his children located at Yad Vashem, the Holocaust Memorial in Jerusalem. Each time I stand in front of this amazing memorial I am wrought with emotions. I grieve the lives of these innocent children; almost two million children were murdered in the Holocaust. I marvel at the bravery of this man to willingly go to his death just so his orphan's would not be scared. I am frightened by man's susceptibility to become so depraved that they would murder millions and millions of innocent people in cold blood, because they were different. And I wonder, would I have done what Korczak did? Would I have gone to my death to make it easier for the children, even though I had been offered life? I honestly don't know. But I hope I would have. What would you have done?
Posted by Tonya at 7:52 AM

"...the bravery of this man to willingly go to his death just so his orphan's would not be scared. ...Would I have gone to my death to make it easier for the children, even though I had been offered life?"

"his orphans" - no, they were no longer orphans. I will explain. For his heart had been given to them even before that moment, and in so giving he became their father, thus they were no longer orphans. Now you may ask if you would have done what he did. And you know - you would not abandon your child (whether by birth, adoption , or gift of ADOINAI. And while you may not yet understand this with your mind, your heart knows it very well - remember, the love that ADONAI places into a mother's heart for her child is not a transitory feeling that disappears in the darkest watch of the night. It is instead more like a Holy Fire that consumes and compels us because of the magnitude of love in our hearts to give our all for our family and especially to the benifit of our children - including our very lives if need be. Do not be afraid, for if He calls you to such a task, He will also provide for it.